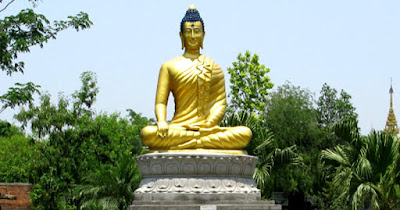 Lumbini is situated in Rupandehi district of Southern Nepal. It is the most important holy site as it is the birth place of Lord Buddha who was the founder of Buddhism. The site was declared as World Heritage Site by UNESCO in 1997. The site has been developed into a monastic zone (an international peace park) with places of religious significance. The site is separated into eastern zone having Theravadin monasteries and the western zone having Mahayana and Vajrayana monasteries.

How to travel from Delhi to Lumbini

If you are on a budget tour then the cheapest route would be from Delhi to Gorakhpur to Sonauli border to Lumbini.

Delhi to Gorakhpur: From Delhi travelers can take Indian Railways train to Gorakhpur (Gorakhpur Junction GKP). It takes around 12 hr to 16 hr to reach and the fare ranging from around Rs 500 for sleeper class to Rs 1200 for Ac 3 tier. If one can spend on flight the cheapest flight ticket could cost around Rs 3000 and take around 2 hr to reach Gorakhpur (GOP).

How to cross Sonauli (India-Nepal) border:

The bus drops you few hundred meters from the border. From where you can either walk or take a cycle rickshaw towards the border immigration office. It’s advised by many experienced travelers to catch a ride to your destination from Nepal after crossing the border.

Travelers on foot can cross the border 24 hrs a day. The border closes for vehicles at 10 pm and reopens at 6 am.

It is advisable to carry US dollar currency to pay for visa. Only Rs 100 denomination note can be used or exchanged in Nepal.

Sonauli to Lumbini: The distance from Sonauli (Indian-Nepal) border to Lumbini is only 30 km. From the border you can take a rickshaw to Buddha Chowk and then take a bus or a cab to Lumbini Bazaar. It’s a short ride and wouldn’t cost much.

Accommodation: Travelers can find many hotels in Lumbini and during the off season you can get deals as cheap as Rs 1000 for 2 nights. One day is enough to take the tour of the Lumbini World Heritage Site.

Food: The best place to eat would be at your lodgings and also advisable to carry food when you visit the site.

Conveyance: Travelers can rent a cycle (around Rs 300/day) from there accommodation. They can also rent rickshaw tour (3 hr tour for Rs 700 and 6 hr tour for Rs 1000) at the site.

Any updated fees are written in front of the main ticket office of Maya Devi Temple. If your camera takes videos don’t mention it otherwise you might end up paying the video camera fee.

Places to visit in Lumbini

The temple is the birth place of Lord Buddha. This temple marks the spot where Queen Maya Devi gave birth to Lord Buddha. The archaeological remains of this site date back to time of Ashoka around 3 century BC. The archaeologists have also found ruins dating back to 6 century BC of remains of ancient tree shrine that belongs to 550 BC.  This site is earliest evidence of Buddhism as well as Lord Buddha. The Ashoka Pillar, Sacred Bathing Pond and the Bodhi Tree are inside the premises of the temple complex. The temple complex remains open from 6 am to 6 pm.

It’s is considered a sacred pond because Queen Maya Devi used to take bath here and Lord Buddha also took his first bath in this pond. There are ancient ruins dating back to 3rd century BC on the side of the pond.

It’s a 3rd century 6 meter tall pink sand stone pillar built in respect by Ashoka after he visited the birth place of Lord Buddha to accept Buddhism. It’s considered as first ever such structure built.

The Bodhi Tree (Peepal tree) is inside the temple complex where devotees meditate and pray. The tree has become a symbol of Buddhism because it was under a Bodhi Tree where Lord Buddha attained enlightenment in Bodh Gaya.

The Lumbini Museum is the world’s first state of the art museum of Buddhism. It is situated in the sacred garden area. The museum has a very rare collection of 12000 artifacts containing religious manuscripts, metal sculptures, Terra Cottas, coins from Maurya and Khusana dynasty and stamps from all over the world depicting Lumbini. The Lumbini international research institute facilitates study of Buddhism and the religion in the general. The museum remains open from Wednesday to Monday from 10 am to 4 pm.

The Flame remains lit all the time and is placed at the center of the garden representing world peace and friendship and was brought from the United States of America.

Travelers can also visit various monasteries and pagoda where they can spend time meditating and praying in the tranquil ambiance. These are beautiful architectures built by different countries promoting the message of peace and unity and also art and culture.